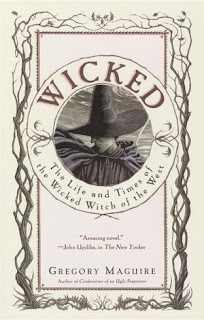 Oh Gregory Maguire, how exhausted you left me after reading your book! Here I am, excited to finally read your ultra-bestselling novel-turned-pop-culture-phenomenon Wicked, and you give me frustration, tiredness and sheer brilliance! Why, oh why do you take yourself so seriously?
Don't get me wrong, fellow book lovers: if you don't know what book to read next, make sure Wicked: The Life and Times of the Wicked Witch of the West is at least one of your options. Come to think of it, go buy it right now and read it already. There is no escaping it. Not only have I for years obsessed over the marvelous soundtrack the Broadway adaptation of this book has spawned (as if it were not enough that Idina Menzel and Kristin Chenoweth, two biggest Broadway divas of our time united as Elphaba and Glinda, the incomparable Joel Grey plays the Wizard!), but now that I have read the book, I feel I will never not think about it. It's one of those works of fiction that stay with you, for better or for worse.
Which isn't to say reading it was easy.
For Wicked, Maguire re-imagines the Oz we thought we knew from the original L. Frank Baum novels and, I would argue even more importantly, from the 1939 Judy Garland film of the same name. The book serves both as a prequel and a parallel story of the Wicked Witch of the West, here named Elphaba, and her life up to that legendary moment when she met Dorothy Gale of Kansas.
Ostracized from birth because of the unpleasant color of her skin, it turns out that Elphaba was a quiet and smart girl with a strong sense of morality and social justice, which made her the perfect enemy of the tyrannical Wizard. The book follows her childhood, university years, days of activism in the Emerald City and, finally, her growing into the fearful Wicked Witch. The cast of secondary characters is extensive, but arguably the two most important characters are Glinda, Elphaba's roommate at college and the first person Dorothy meets after her crash landing in Oz, as well as Nessarose, Elphaba's handicapped-yet-popular sister, who will be the first victim of the intruder from Kansas.
Since its publication in 1995, Wicked has been talked about everywhere, and now that I've read it, I testify that indeed, it is a must-read. The immaculately written 400 pages of the political, sexual and personal circumstances of some of the most influential characters of today's popular culture are all present in this modern classic of extraordinary quality. The book is deeply political, as it investigates the notions of patriarchy, dictatorship, gender (in)equality and, most importantly, evil. Maguire obviously loves language, and Wicked is a book that encourages the reader to lose him or herself in the beautiful and harsh narrative about the life of Elphaba.
And what a character she is! To turn one of the 20th century's most feared villains into a protagonist nobody will be able to help cheer for is not a small feat. Elphaba embodies all the pains of being human, and it is the negotiation of her 'wickedness' that is the main focus of the novel. She is a literary character that will soon become legendary.
All this said, Wicked  is often a frustrating book to read. There are simply too many details, plot lines and characters for a casual reader to follow. Chasing the answers may prove to be too exhausting for some readers, as Maguire does not allow the plots to end too neatly. There are many answers that are merely hinted at, while some are open to the interpretation even after the book ends. I was personally delighted by this decision, but am certain many people will resent Maguire for this reason. The book does take itself a little too seriously. I can imagine some people might find it off-putting, but it is a great piece of fiction, nevertheless!
No one mourns the wicked.
RATING: 5/5
Posted by Nikola at 3:13 AM

I've got the final book on my shelves, Out of Oz, and have seen Wicked the play. You have me curious about the series now.

I read this book after seeing the musical first and I thought it was going to be light-hearted and entertaining. It was quite a shock how seriously it takes itself!

Wow sounds like a roller coaster of a book. I have thought about reading this one but I'm not a fan of general adult fiction books, I swear I will be reading YA even once my hair turns gray.

Thanks for the great review. :)

I learned about your blog from Goodreads. Now, following it :) Great reviews you've got here.

Oh, if you liked Wicked, I'm sure you'd like the other book of Maguire - Confessions of an Ugly Stepsister. Personally, I liked that much better than Wicked. But that's just me :)

Anyway, I hope you check out and follow my blogs as well...

"You're a yes in the world of no's
you're the Beatles to my Stones..."

Nikola
Welcome to my blog! Feel free to browse around and interact with the website, or click here to learn more ABOUT ME. 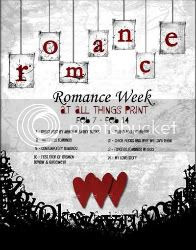 He, She and It
by Marge Piercy
tagged: currently-reading